Vitiligo or Leukoderma is a problem in which white marks and patches having irregular shape appear on various areas of your skin. This disorder occurs when melanocytes (cells which produce melanin pigment responsible for giving color to your skin) are destroyed or stop functioning. It is the most common depigmenting disorder that affects approximately 0.5 to 1% of the general population regardless of race and sex.

The exact etiology of vitiligo is still unknown and it is associated with autoimmune, neural, genetic, oxidative stress, or viral causes. Vitiligo can start at any age, but usually makes its first appearance between 10-30 years of age. It can be generalized (white patches all over the body), segmental (white patches only on one side of the body) and focal (white patches limited to only one or a few areas of the body).

This condition may be psychologically devastating due to the stigma attached to it. And as vitiligo affects more commonly the younger population, it can affect their self esteem creating problems in matrimonial alliance and other social interactions.

The aim of any treatment remains

Various treatments (Medical, Light based and Surgical) have been tried for Vitiligo; but there always remain a challenge to achieve the desired results in vitiligo patients.

Medical treatment is given primarily to stabilize the fast spreading vitiligo patches, as the results obtained for repigmentation of existing patches with medical treatment are unreliable and non-satisfactory.

Light based treatments are also found to be not very effective when used alone; thus these are being used only as a supplementation to the surgical treatment. Most of the Light based UV therapies expose both the affected and healthy skin while UVB laser targets only the affected areas, which minimizes the risk of injury to the surrounding healthy areas and significantly reduces recovery times. We, at Aura have UVB laser which produces short pulses of 295 - 350 nm light, that has been demonstrated to treat white patches.

We at Aura Skin Institute, have devised an innovative surgical technique called LA-PEEST (Laser Assisted, PRP Enriched Epidermal Suspension Transplant) which is the new hope for stable vitiligo patients who have cosmetically disfiguring patches over exposed parts. This is a very new surgical technique which makes use of high fluence ablative laser for denuding vitiligo patches and then covering them with patients' own normal skin tissue of much smaller size admixed in suspension of platelet rich plasma (PRP). PRP is nothing but one's own blood which is concentrated by special techniques and contains millions of growth factors in very high concentration. It helps in faster healing and also initiates a cascade of signals for restoration of normal pigmentation. LA-PEEST helps in attaining faster repigmentation matching the normal skin as early as 2 to 3 months without leaving any scars or tell-tale signs of surgery. This surgical technique LA-PEEST for the treatment of vitiligo is being widely acclaimed and was selected as an 'AWARD PAPER' in the prestigious conference 'World Congress of Cosmetic Surgery 2017' held at Bangalore, INDIA from 4th - 6th May, 2017.

The procedure is done under local anaesthesia. In this procedure,

The pigmentation starts appearing within 2 weeks of the surgery and significant results are noticed in 2-3 months time.

Vitiligo is a disease in which some white spots occur on the skin which leaves cosmetically very disfiguring effects especially on individuals with dark skin types (like we Indians). This can sometimes lead to shattered self-confidence and serious psychological problems like depression and suicidal tendencies. We, at AuraSkinInstitute offer you the latest and most effective dermato-surgical treatment (Laser Assisted, PRP Enriched Epidermal Suspension Transplant) for stable vitiligo patches. This gives you amazing results and achieves nearly complete repigmentation of the skin in 75-85% of the patients. If you have any doubts regarding this treatment, then here is a list of some main FAQs and their answers to clear your worries and concerns. Have a look!!.

"We delight in the beauty of the butterfly, but rarely admit the changes it has gone through to achieve that beauty."

Aura Skin Institute makes every effort to bring that beauty in you :)

There were vitiligo patches on the left side of my face but after this treatment by Dr. Suruchi Garg they all are gone and hardly detectable now. The treatment that she gave me was some new technique, where she used lasers and PRP. She offers treatment for many dermal/cosmetic imperfections. Doctor herself is very polite and humble, she really listens to her patients and treat them very nicely. Even the staff is very helpful and nice. I know I'm always going to thank her throughout my life for this.

"Thanks Dr. Suruchi for infusing a new leash of life into me. You are next to God for me"
I had ugly white patches on my left forearm and arm. I had tried many treatments but nothing really worked. Then I came to know about Dr. Suruchi's new Laser-assisted surgical technique for vitiligo. She did this transplant surgery on my arm in single sitting. Now after 3 months of surgery, the white patch is no longer visible. The results are so natural that I just can’t believe it! My life has completely changed. Thanks! 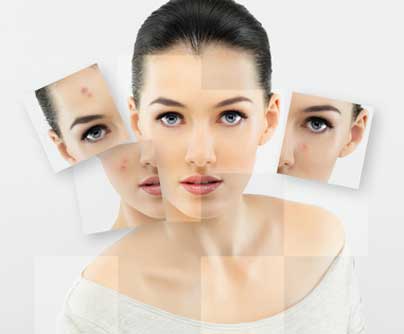 AuraSkinInstitute offers you the latest "No stitch" Dermato-surgical techniques for all your skin and hair problems, including hair transplantation, vitiligo surgery, ingrown toenails remedy, moles and warts solution and repair of torn ear lobes.. We assure you effective treatments with best results. Our panel of fully trained experts promise excellent outcomes by the use of our world-class techniques and equipments. So, what to worry about!!! Just come to us and get a youthful skin, you always craved for!

Get a Free Quote Here »

Results at 8 weeks of vitiligo surgery in a patient having stable vitiligo on his leg.

The lady was suffering from vitiligo or leukoderma and her white patches on nose were treated with Laser Assisted, PRP Enriched Epidermal Suspension Transplant surgery.